Now available in bundle with WiFi logger – exclusive to weatherstations.co.uk – please phone or email for details.

In a nutshell: The Davis Vantage Pro 2 (VP2) stations are a family of weather stations designed to professional standards and providing good accuracy and reliability, while still relatively affordable. With a wide choice of sensors and accessories, the VP2 stations offer considerable flexibility and expandability in their configuration and in data-handling capabilities. 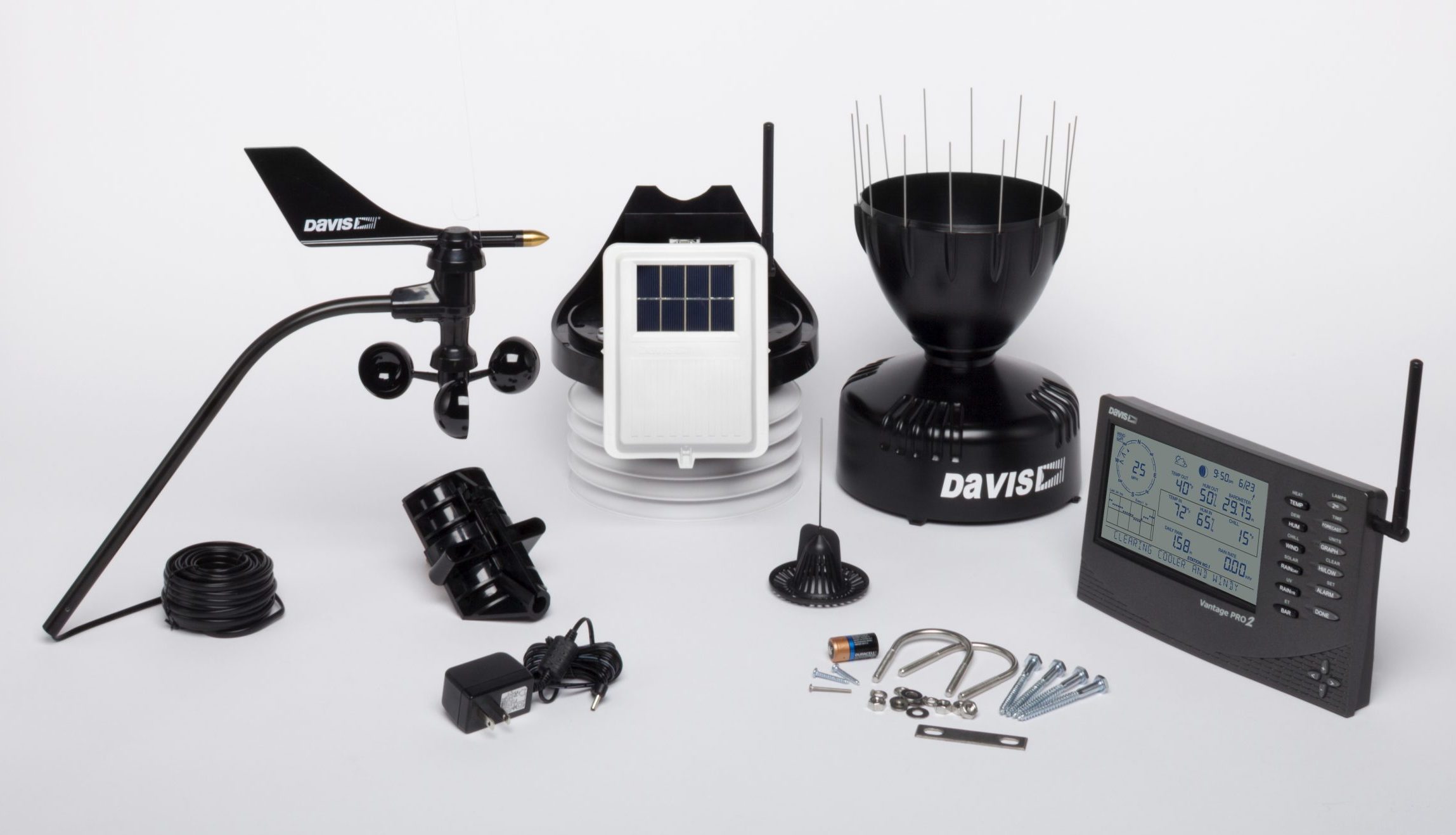 These three components can be packaged together and bought as a single complete station. See picture (click to enlarge) for the full set of parts supplied with each station. The station is complete in itself, other than mounting pole and console batteries, but if you wish to log data to a computer or upload to an online weather platform then a logger (or alternative upload device) must be specified separately and perhaps bought as a discounted station+logger bundle.

There are actually other options for configuring and buying a VP2 station. A VP2 station always consists of one or more sensor transmitters and at least one receiver unit, usually indoors. Traditionally, the receiver was always the display console, but in 2020 there are other options.  One recently-introduced alternative – for wireless VP2 systems only – is the powerful Weatherlink Live data gateway – more details below. So it’s perfectly possible to have a station composed of a sensor transmitter and a Weatherlink Live unit (without its own display), for example.

Note that VP2 wireless sensor transmitters broadcast their data and any number and type of receivers can listen in to that data. So it is fine for a single station to have a Weatherlink Live unit as one receiver and then any number of standard display consoles for local display purposes. (NB Cabled VP2 stations can be connected only to one cabled display console or Envoy.)

All the components of a VP2 station (console, ISS etc) are available as individual parts and so it is possible to replace components or to build up an unusual VP2 specification from the constituent parts, but in general it will always be more cost-effective to buy a complete VP2 station as a single pre-packaged item.

The key features of typical VP2 systems include:

Additionally, there is a range of optional accessories that allow a weather monitoring installation to be customised for many specialised applications: 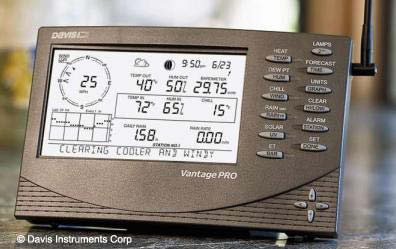 The VP2 display console is the unit that sits (usually) indoors to provide a comprehensive display of current weather conditions on its large LCD display. The console acts as a receiver and processor of the raw outside data, a display unit and also accommodates the station’s optional data logger, if fitted.  Full details of the console display are described on the separate console display page.

Consoles come in both wireless (shown here) and cabled versions and obviously need corresponding wireless or cabled outside sensors to match. (It is not possible to mix wireless and cabled parts). Read more about VP wireless technology.

Also available is a type of console without a display known as an Envoy unit, described in its own short section below, and intended for specialised installations where a PC will always be used to view the weather data, and hence where a console display would not necessarily be needed. 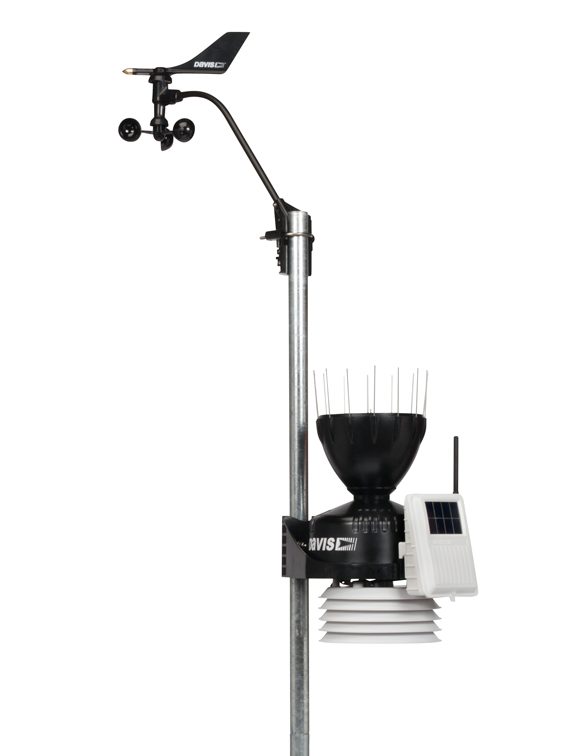 In a standard VP2 station, the outside sensors are grouped into two units: the anemometer for measuring wind speed and direction; and a second unit known as the Integrated Sensor Suite (ISS) containing temperature and humidity sensors and the rain gauge. The ISS also serves as a mounting point for solar radiation and UV sensors, where fitted. [NB Davis promotional pictures (such as the one reproduced left) for simplicity often show the ISS and anemometer mounted as if they were a single combined unit, but they are two quite independent parts and, in practice, best mounted separately – see our advice on Practical Aspects of Installing an AWS.]

The ISS consists of the conical black rain gauge mounted above the white louvred radiation shield, which serves to prevent temperature errors due to sunlight falling directly on the temperature sensor. This shield contains the temperature and humidity sensors but, in addition, houses the circuitry for combining the inputs from other outside sensors, via sockets into which cables from the other sensors plug.

The ISS comes in two versions: wireless and cabled. In wireless stations, the circuitry within the radiation shield contains the wireless transmitter. In cabled versions, there is a single cable joining ISS and console – a major improvement compared to the three cables necessary with older station designs. The wireless ISS is also fitted with a small solar panel to supplement the built-in lithium battery to power the sensor/wireless circuitry; this will naturally perform best in the UK when oriented to face south. Power for the cabled ISS sensors is supplied via the cable.

The anemometer is supplied with a 12m cable and can therefore be mounted up to 12m away from the main body of the ISS. Standard extension cables can also be bought to increase this distance if required. For wireless VP stations only, there is the option of buying a separate anemometer transmitter, which allows the anemometer and ISS to be mounted completely independently.

The solar and/or UV radiation sensors are mounted on a small shelf assembly that sits alongside the rain gauge. (The two sensors can just be seen around the top edge of the rain gauge in the picture above).

In 2015 Davis introduced (in Europe only) a further set of VP2 models such as 6155 & 6164 with an enhanced temperature/humidity sensor. These models were in production for only about 12 months before a still newer temp/hum sensor became available (see note following table below). Davis took the decision for 2016 production to fit this latest high-accuracy temp/hum sensor to all VP2 stations while still retaining the original 6152/6162 etc model numbering scheme. These latest VP2 stations can be identified as AS (or later) revision.

The 2015 enhanced models were superseded by this change to the SHT31 sensor and production was stopped. For anyone wishing to review these 2015 VP2 model numbers please see the 2015 Enhanced Temp/Hum sensor page.

There are a number of different station models available within the VP2 family. The key to understanding the range is actually simple: the many stations are just various combinations of three basic choices of optional features, as follows (follow the links in each bullet point for more information on each option):

These three pairs of options therefore give rise to six different station models, as shown in the table below (all wireless combinations are available, but no cabled models with FARS are made). The ‘ISS only’ column shows the part number for the ISS (including anemometer) bought as a separate item, either as a replacement unit for an existing ISS or to be used e.g. with a pre-existing or separately specified console, an Envoy or Envoy8X console or a Connect 3G unit.

For completeness, the last three rows of the table also show the three new ‘Ag’ (agriculture) ISS units, which are only currently available as ISS alone (ie and not as part of a complete station) and which therefore need to be paired with a suitable console or Connect unit.

Note: There used to be a pair of 6334C and 6334OV ISs units that combined solar sensor and DFARS shield but these have now been discontinued in favour of the 6820C/6820OV pair with passive shield only. The 7747 DFARS shield obviously remains available as an add-on kit for all passive shield ISS units and so 6334 can be replicated as 6820+7747.

Please note that all VP2 stations we supply come with the latest Temperature/Humidity sensor as standard. You do not need request the latest sensor.

All station variants in the VP2 range of AS (or later) revision, manufactured during 2016 on, are now also fitted with an upgraded Temperature/Humidity sensor offering even better accuracy and believed to be the Sensirion SHT31 sensor.

The graphs to the right show typical accuracy specifications of the SHT31 sensor for both humidity  and temperature (and also of the SHT30 sensor, not currently used by Davis). The marked benefit of using the SHT31 part should be clear to anyone familiar with the specs of the older SHT11 sensors, with a maximum temperature accuracy of ±0.3°C and excellent humidity accuracy even to high humidity values. For users seeking optimum accuracy for their weather readings, this latest sensor should give excellent results, subject obviously to having a good sensor exposure.

Technical note: The SHT31 sensors use a modified data interface compared to the previous SHT11 and SHT15 sensors and therefore AS revision VP2 models use a slightly updated design of VP2 SIM circuit board. While the old and new sensors are plug compatible, the two sensor types have different temperature calibrations and an offset will need to be applied if an SHT31 sensor is used with a pre-AS revision VP2 station or an older sensor with an AS (or later) VP2. 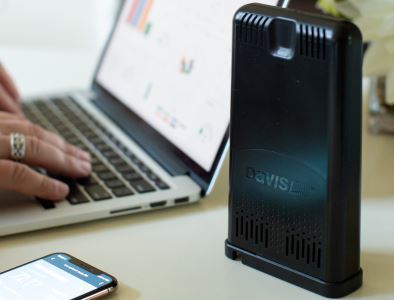 The 6100 Weatherlink Live unit is now a key part of the VP2 range (and may also be used with a Vue station). Weatherlink Live (WLL) effectively functions as a console or receiver for VP2 wireless data and will pass data to compatible programs across the local WiFi network and upload data directly to the Davis weatherlink.com cloud platform. It can function alongside other consoles or can dispense with the need for other consoles completely. WLL has also largely superseded the Envoy unit (see below), though the Envoy remains available.

Full details of Weatherlink Live may be found on its own page. 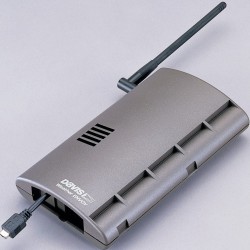 NB It’s convenient to classify the Envoy as a VP2 console, even though the Envoy unit doesn’t have its own display, because it does perform many of the same functions as the standard VP2 console.

Thus the Envoy 6316 (wireless version) and 6316C (cabled) units have essentially identical capabilities to the 6312 standard VP2 console types, but are not fitted with the LCD display panel and control buttons. This has two consequences:

In general, we don’t recommend the use of an Envoy as the only console in a VP2 system – you will not save money and the lack of a display is often a disadvantage. However, there are a few particular circumstances where an Envoy can be useful, for example:

Note: There was an enhanced version of the Envoy console previously available called Envoy8X but this is now discontinued in favour of the Weatherlink Live unit.

Most new VP2 stations are purchased with some type of data logger or Internet upload device also specified to allow da5ta to be logged locally or uploaded to online weather platforms and websites. The Weatherlink Live data gateway (see above) is increasingly popular but traditional Weatherlink USB loggers or third-party network loggers such as the WiFi Logger and Nano are also widely used. The traditional-type loggers are a module, which fixes in a recess in the back of the console and allows weather data to be stored for several weeks without a PC being connected.

If data is to be stored and processed locally then a number of different software programs are available to do this job.

To read more about Weatherlink please our general introduction to compatible data loggers and software and also our specific Weatherlink page.

For wireless stations only, a number of additional independent sensors, known as supplementary stations, can be added to a VP2 system. These stations fall into two groups: supplementary temperature and temperature/humidity stations for general-purpose monitoring at locations other than the ISS; and more specialised stations for horticulture/agriculture applications, primarily for measuring soil moisture and leaf wetness, but also able to make extra temperature measurements, for example of soil temperature.

Read more about Supplementary Stations on our VP Accessories page.

Beyond the specific descriptions here on these product pages, we also have two further pages to help you decide which may be the best station for your requirements: