The huge number of Davis weather stations sold around the world in recent years has encouraged third party designers to market their own compatible logger products. These loggers are typically fully compatible (eg no ‘green-dot’ issues) with standard Davis stations such as the VP2 and Vue of any age, new or old.

Davis’s own logger products – the modern Weatherlink Live unit or the more traditional Weatherlink USB and serial loggers – are still often the first choice when it comes to choosing a logger. But the third-party loggers can offer features that are not available with the standard Davis loggers and in certain applications these alternative loggers can be an attractive option.

In general, we would term these Davis-compatible third-party loggers as ‘enhanced loggers’ in that they do the same basic job as traditional Davis loggers like the USB and (now-discontinued) IP loggers but also offer important extra features too. These extra features vary considerably between loggers – prospective users will need to review the individual logger pages linked in the descriptions below to understand the exact capabilities of each logger. One key feature of all third-party loggers released to date is that they provide a data feed in the traditional Davis binary format rather than the new JSON-based formats used by Weatherlink Live and weatherlink.com. This ‘traditional’ format is compatible with almost all software designed for use with Davis weather stations and so, for example, anyone wanting a network logger compatible with older software such as Weatherlink for Windows needs to specify a third-party logger.

We currently sell compatible loggers from two different manufacturers. One is best-known for the WiFi Logger, but also offers two other compatible logger types. The second is the German company Smartbedded which supplies loggers and associated software under the Meteobridge branding. The feature-sets from Wifi Logger and Meteobridge loggers do overlap considerably, but at the same time there are significant differences in their applications, as follows:

The WifiLogger products tend to be simpler and cheaper and are best-suited to two types of application:

It certainly is possible (with the WiFi logger or Meteo-Pi Ethernet) to run both modes simultaneously, but available computing power in the logger is limited and it’s probably best to avoid using both modes too intensively (eg uploads to many cloud platforms as well as non-stop local data transfers) and at the same time.

The Meteobridge logger products are a somewhat different concept. MB loggers can upload data directly to many cloud platforms and are ideal for this application. Local data manipulation is also very well catered for, but for this role the MB loggers are probably best thought of as a self-contained software product. The MB software is very powerful, flexible and well-developed and would typically be used in its own right rather than for passing data to another external program such as CumulusMX or similar. (Data export from MB loggers to other programs is certainly possible, but if your prime requirement is to run a program like CumulusMX, Weather Display etc then a cheaper/simpler alternative logger is typically a better choice.)

The Wifi Logger itself (now as the v2 product) is the main and original product from the WifiLogger company. This logger effectively emulates the old and now-discontinued Davis WeatherlinkIP logger in that it can pass data to software running on local computers across the local network and can also upload data to the weatherlink.com cloud platform. Like WeatherlinkIP, it plugs into the back of a Vue or VP2 console. But the Wifi Logger has two important differentiators from WeatherlinkIP: First, as its name suggests, it connects to the local network via WiFi rather than via cabled Ethernet. Second, it can upload directly to a number of other Internet platforms and websites. So, some users may be able to dispense with running a local computer completely and use a Wifi Logger as the only upload device they need to operate.

Meteo-Pi Ethernet (MPE) offers broadly similar features to the Wifi Logger, but differs in two important respects. First, and again as its name suggests, it connects to the local network via a cabled Ethernet connection and is not a Wifi part. Second, there is a more limited set of cloud platforms that MPE can upload to.

In general, this Meteo-Pi logger may be a better choice when maximum reliability of connection is required. It’s a familiar experience that some Wifi networks can drop out from time to time and occasionally require the router to be rebooted. Other devices on the Wifi network do not then always reconnect reliably without restarting them. Ethernet-connected devices are less vulnerable to such issues. While MPE is less fully-featured than the Wifi Logger in terms of upload targets, it does have several other advantages and is engineered for optimal robust operation. If a cabled Ethernet connection is acceptable then Meteo-Pi Ethernet is well worth considering.

The Meteo-Pi logger is a different proposition again. This is a logger designed to fit directly on the IO pins of a Raspberry Pi computer (ie it is a Pi HAT) with a small daughter board providing a feed of data from a Vue or VP2 console. Meteo-Pi is intended to provide an inexpensive serial interface direct to the Raspberry Pi, but with no additional features beyond basic logging in Davis legacy format. Software such as CumulusMX or Meteobridge for Pi running on the Pi then provides all the data handling and cloud upload features that the user might require. Because the processor in a Pi 3 or Pi 4 is very significantly more powerful than those in loggers such as Wifi Logger or Meteobridge Nano, software running on a Pi can offer power and features not available from these simpler loggers.

Note: Do not confuse Meteo-Pi and Meteo-Pi Ethernet. Despite their similar branding, these are very different devices. Meteo-Pi operates only as a serial interface to software running on a Raspberry Pi. On the other hand, Meteo-Pi Ethernet is a general-purpose logger/uploader that can upload directly to eg weatherlink.com and will also connect to any computer running compatible software. 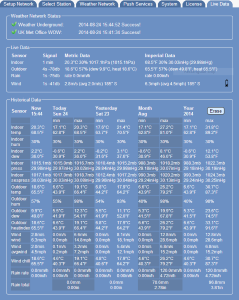 Meteobridge (MB) is essentially a software (or firmware) platform for processing data from Davis (and other) stations, but can be slightly confusing at first acquaintance because it is available as multiple products. Although MB is fundamentally software, it is installed in different hardware devices such that it is the only program that can run on its host device. If the device is rebooted then the MB program is automatically restarted and no other program can be installed or can run. The hardware device effectively becomes a dedicated MB platform (which is of course usually fine for a device intended to be a long-term weather computer ). The key difference between the various MB products involves the hardware device on which MB is installed. If this sounds slightly confusing then read on – in practice MB devices are all reasonably straightforward to use.

To a large extent, exactly the same MB program is installed on every MB product, but – as explained below – some MB hardware devices have more powerful processors and more memory (including permanent SD card memory in some MB devices); these more powerful devices unsurprisingly allow more complex configurations to be run and some extra features to be unlocked.

Two more important things to say about Meteobridge: First, MB is really designed as the only device that you would need to run locally. While MB does have ways of feeding data to other local computers, this is typically not how it is used – MB is intended to handle all the data manipulation that you might need built into its own software. MB is also able to upload data to many cloud platforms so again, from this point of view, MB is designed as a one-stop shop. MB is an excellent platform provided you are content with its feature-set, which is extensive but inevitably only one way of doing things. But if you have another favourite weather program like CumulusMX, Weather Display or Weewx, for example, then one of the other non-MB logger options  might be preferred.

The second major feature to highlight is that Meteobridge is surprisingly powerful software with many capabilities, including some unique features such as the Templates scripting not readily available in such detail in competitors. The Meteobridge website is the place to look for more detailed information – we cannot begin to summarise all the many features in a single sentence here. It’s worth adding that powerful features doesn’t mean that MB is difficult to use. If all you need are the basic MB features then these are reasonably accessible to all users. But the power features are still there in reserve should you wish to delve more deeply into what MB can deliver.

The neatest option for running Meteobridge (assuming you have a standard Vue or VP2 console) is as the MB Nano or Nano SD products. These are traditional style loggers in that they plug into the back of the console with WiFi (only) connectivity to your local network. The console/logger thus becomes a single integrated unit providing all the local data handling that you need.

The Nano SD logger is supplied complete with a special high-reliability SD card already fitted to provide long-term data storage in the MB schema. (Plain Nano is exactly the same logger but minus the special SD card. A suitable SD card can be retrofitted to a plain Nano unit, though this is a rather fiddly process due to poor access to the SD slot.)

It’s worth noting that any network logger (such as Nano or Wifi Logger, but not a USB or serial logger) installed inside a console generates a certain amount of heat and will cause the inside temperature to read high. If this relatively minor point is important to you then other logger types may be preferred, such as the Meteo-Pi Ethernet unit.

There are two other notable Meteobridge products, still all running the main MB software:

Meteobridge Pro Red is a complete standalone MB unit that can receive data direct from Vue and VP2 wireless transmitters. In other words, there is no need of a separate console at all, although of course you can still run a console independently of the MB Pro Red unit if you wish. This is also a neat and compact unit that provides extra features like its own miniature display and a cabled Ethernet connection in addition to Wifi. (For completeness, let’s also mention the MB Pro Black unit, which resembles the Red unit but contains no wireless receiver. Hence it must have a feed of data from eg a traditional USB logger in a console or a Weatherlink Live unit.)

The second alternative Meteobridge product is MB for Raspberry Pi, which is a pure software product. This is not a product that Prodata sells because it is a simple software download (see step 2 at the MB website)  with a licence that can also be purchased direct from the Smartbedded website. Creating a MB for Pi unit simply requires copying the download to an SD card and booting your Pi unit from that card. Your Pi then becomes a dedicated MB device for as long as that SD card is used as the boot source. Note that if you wish to store data long-term on an SD card then you must use an SLC SD card and there are strict rules on which such cards are allowable.

In some ways, MB for Pi is technically a good option for MB use because a Pi 4 (especially) is always going to offer more computing power and other resources than the more limited hardware in eg Nano units. However, the constraints on SD card specification, while understandable, are a significant drawback. MB for Pi could become more attractive if allowable storage options could be extended to Pi-compatible SSD drives, which are now widely available.