Skip to content
Meteo-Pi Ethernet Logger is now in stock and available from our online shop!
Buy Now 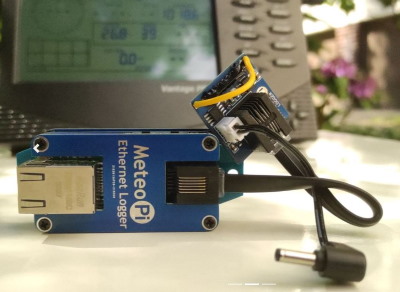 Meteo-Pi Ethernet (MPE) is a new Davis-compatible logger that connects to a VP2 or Vue console; logs data in the familiar legacy Davis formats; and can pass both real-time and archive data to local software via the local network. MPE also has a range of Internet upload features as described in the Data Features section below.

Note that the MPE logger is a network logger, i.e. it connects to the local network via an Ethernet cable only and is not intended to cable direct to a computer (except when updating the logger firmware). Also, unlike the Wi-Fi logger from the same manufacturer, this is not a Wi-Fi device. Network loggers in general obviously allow for a considerable Ethernet cable (or WiFi) distance between the logger and any linked computer.

This MP Ethernet logger provides comparable features to the old Davis WeatherlinkIP (WLIP) logger (no longer manufactured), but also adds some extra functionality. In essence, MPE is a modernised and enhanced version of WLIP.

Physically, the MPE is a little different from the old WLIP logger; MPE is a small, separate, free-standing device connecting to the console’s logger pins via a 6-conductor ribbon cable and interface plug rather than being fully internal to the console. As a result, using the MPE logger causes no additional heat to be generated inside the console, thus allowing the console’s inside temperature/humidity to read more accurately. (Inside temperature will still read high of course if the console backlight is left on for any significant period.)

Overall, the MPE is designed to be simple to set up and to use. For configuration there is a simple 3-page browser interface through which settings can be entered and edited and which also includes a page of real-time data. Main MPE features are as follows:

Both local and Internet uploads can be enabled simultaneously if required but, as with all such loggers powered by a single-core microcontroller, some ‘tuning’ of the upload settings may be needed for optimum results.

In practice, almost all of the well-known Davis-compatible weather station programs can receive data from a WeatherlinkIP logger and hence are compatible with the MPE logger. Examples include Windows PCs running programs like Weatherlink for Windows or Cumulus/CumulusMX or a Raspberry Pi running suitable Linux software. But the list includes essentially any computer type running WLIP-compatible software;

The number of upload targets to export data over the Internet is deliberately limited in the interests of robust operation and to minimise maintenance updates and support issues. The five chosen targets are:

Single DC power input for both console and MPE: Network loggers always need more power than console batteries can provide. Powering the console from an AC mains adapter is the usual solution; but with MPE, the standard DC console connector can be moved to the MPE unit, which will then supply power both to the logger and to the console via the ribbon cable plus a short, attached lead that plugs into the console’s DC input. DC power can also be applied via the USB-C connector located below the Ethernet socket, which may be a useful option if the user chooses to use a PoE (Power over Ethernet) connection in conjunction with a USB-C splitter unit. Finally, the logger also has soldering points for a custom 5 V power source;

Logging continues even with mains outage: Provided the console contains C cells in good condition, logging by the MPE will continue even if the DC supply to the MPE/console is lost temporarily. New batteries should last for at least 3 months of continuing MPE logging since no battery power is supplied to the MPE circuitry except to maintain the basic logging function. Note that all uploads, both local and Internet, will stop during a power outage, but generation and storage of archive data will continue as normal for upload once mains power is restored;

Logger capacity: The MPE logger has the same archive capacity of 2560 records as other standard Davis loggers. (Using the same logger capacity is necessary to retain full compatibility with the VP2 and Vue consoles);

NTP clock synchronisation: The MPE logger is able to maintain time accurately by calls to NTP Internet time servers (provided this function is enabled and there is an Internet connection). At startup and subsequently at the NTP interval, the logger checks the console time and corrects it if there is a discrepancy of more than 5 seconds. NTP is a free and widely available Internet time-checking service;

Reset buttons: The Ethernet-linked MPE is designed to run robustly for extended periods and – unlike Wi-Fi sometimes – should recover automatically from any network outages. But very occasionally there may still be a need for a forced reset and MPE provides for this in stages through to a full reset to factory settings;

LED indicators: There are also 5 coloured LEDs on the logger PCB that provide a constant visual check on various aspects of current logger activity, plus the network activity and line-speed LEDs within the Ethernet socket and a red power LED below the same socket. The 5 MPE activity LEDs are:

Firmware updates: There is provision for firmware updates to be applied via the USB-C connector and a special (free) software utility. MPE is designed to be simple and robust to run and so firmware updates will not often be needed. But this update feature is there as and when required.