This page is in the process of a complete update – please check back in a few days.

This page is about choosing a device to use as a dedicated weather computer – ‘dedicated’ meaning that it is not used for any other purpose than handling the weather data. And ‘computer’ covers any kind of desktop/laptop computer (including small, low-power devices like the Raspberry Pi), but not tablets or phones, which are not suitable for primary processing of weather station data (though of course they can run apps or browsers for viewing the processed data).

This page focuses on the choice of specific computer hardware and assumes that you have already read our introductory page to loggers, computers and software. (If you haven’t already browsed this page then we recommend doing do first). But first let’s recap a few important points:

So, with the points above as background, all users seeking the more comprehensive or flexible or bespoke data handling that running software on a dedicated local computer allows (especially if you need the data handling to run 24/7), will need to choose which computer to buy and use, so please read on!

Any type of computer able to perform the required processing tasks will of course be OK in principle to use. But there are some important practicalities that usually come into play too. Space is often a consideration and a traditional Windows or Mac desktop takes up a significant chunk of bench space, especially when equipped with the usual screen, keyboard, mouse etc.

Power consumption is an important aspect for many users. If a weather computer is to run 24/7 then a large Windows PC with its significant power usage often isn’t an appealing prospect and a different computer type with lower consumption might be preferred. A laptop is a possibility but again these aren’t ideal for continuous 24/7 operation unless the battery is removed.

Cost is inevitably another factor. This is obviously at the user’s discretion – there are some very cost-effective solutions available such as the Raspberry Pi units, but these may be unfamiliar to many users and so a trade-off between cost and technical appeal may often need to be made.

Then there are a number of considerations around the operating system that the computer runs and, often associated with this, is the choice of software – a few programs are multi-platform but in general programs tend to be OS-specific. So the choice of operating system will limit the software options and vice versa, ie a preference for a particular program may often mandate a particular OS.

The OS choice may also have other significant implications. For example, an attractive and space-saving option is to run a weather computer ‘headless’; this means with no screen, keyboard, mouse etc connected – the weather computer is simply controlled from another computer on your network as and when any changes to its configuration need to be made. Otherwise, the headless computer runs quietly 24/7 and performing whatever processing and upload tasks it’s been configured for. If the computer receives its weather data across the network, eg by WiFi from a Weatherlink Live unit, then a small headless unit can be located more or less anywhere that it can receive a usable WiFi signal.  For Linux computers such as the Raspberry Pi running headless is very easy to set up. It is certainly also feasible for Windows PCs but is a less familiar and less straightforward process to set up.

Finally, one other OS-related issue concerns automatic updates. These continue to plague Windows systems and an unexpected automatic reboot following a Windows update can easily cause some loss of weather data. While there are ways of turning off automatic Windows updates, these are fairly obscure for most users and are a definite drawback of Windows as an OS relative to Linux systems, which typically have no automatic updates.

The commonest scenario, especially for hobbyists, will be familiarity with a Windows PC.

Often there may be an older and otherwise disused Windows PC that’s available and this may well be the commonest answer; but perhaps reliability is a concern or it consumes too much power or is simply too large and clumsy, in which case a new PC may be needed. Some fundamentals when considering a newer dedicated PC include:

This is the most obvious and commonplace option, though not always the optimum solution. It will offer the widest choice of software (see examples page for illustrations). In recent years the price of entry-level PCs – which, as above, usually possess perfectly adequate performance – in this class has reduced markedly and is now often in the £150-£200 band.

Entry-level Windows laptops may be especially appealing as a compact, neat, all-in-one PC with few cables needed (one to the weather station and maybe one to a mouse, if preferred) and with built-in WiFi for Internet connectivity. Caveats about such laptops would include considering whether it’s a good idea to run the laptop continuously with its battery connected (may be better to remove the battery?); and a slight concern about the longevity of the eMMC memory with which such laptops are often fitted – as ever, a regular backup of weather data files is thoroughly recommended, just in case.

This category includes a diverse mixture of what might be termed miniature desktop PCs, sometimes called net-top devices, but which all share desktop PC characteristics (i.e. all main circuit boards in a case but with no built-in display, keyboard etc, unlike laptops) and in a very small form-factor of around 100x100x50mm.  There are a number of such devices made but here are three illustrations:

Overall, the ways in which the various PCs described in this section can be used will be diverse. But, in the main, the most likely configuration will be the familiar one with display, keyboard and mouse attached to create a standalone PC running Windows software of one sort or another. Equally, however, if the user preferred, the operating system could be a Linux variant, which would make it significantly simpler to run headless, i.e. with no display etc attached and with the PC being controlled from another device on the network.

It’s inevitable of course that PC design will continue to evolve and new small desktop PCs will launch during 2016 and beyond. So the above should be read simply as a summary at one point in time (Dec 2015) and with the expectation that other newer devices will always be launching into the market place.

Single-board computers (SBC) like the Raspberry Pi (RPi) have all of their components on a single small circuit board. (Other SBC examples include Banana Pi and Beaglebone Black along with many others.)

These SBC devices are really little different in concept from, for example, the miniature desktops described above and so are all part of the same continuum in functionality, but the further reduction in size and power of SBC’s does result in some significant practical differences:

The MeteoBridge family is described in detail on its own page, but in summary: 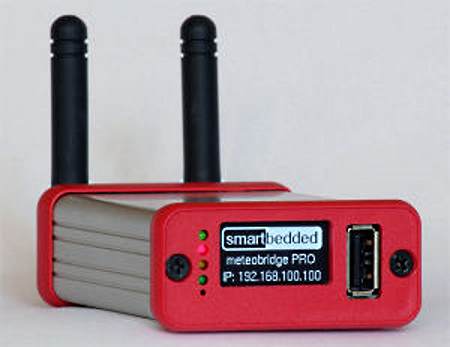 MeteoBridge is weather station software than can run on still simpler PC hardware which probably represents about the minimum specification that can still support highly effective data handling with Internet uploads.

Although MeteoBridge (MB) is software, it is designed to be installed as the only active software on a dedicated hardware platform. The MB host device therefore effectively becomes a MB hardware device – this is its only role in life.
This means that the MB device is designed to be a fully self-contained PC that can carry out processing of weather data unattended for extended periods. For example, if mains power is lost then MB can automatically resume operation when power returns. And MB is designed to be operated headless (ie remotely) by default and at long distance if necessary – its host hardware usually has no display available anyway for interrogation/configuration. So MB has extra features baked into its code to allow its basic operation and its management from other devices to be as straightforward as possible – the configuration required for using default services  is minimal, for example.
The MeteoBridge Pro Red model even has a receiver built in for reception of wireless data from Davis wireless stations so a MB Pro Red unit plus a set of outside wireless sensors can constitute a complete self-contained solution for sophisticated handling of weather data.
MeteoBridge is ideal for users seeking a resilient and self-contained data source that’s as turnkey as possible and with minimal configuration, but which offers much more flexibility than the WeatherlinkIP logger.

It should be clear from the notes above that there are many options when choosing a weather PC but, in a nutshell: