Skip to content
Meteo-Pi is available from our online shop!
Buy Now

There are now two distinct loggers in the Meteo-Pi family – the original Meteo-Pi and the new Meteo-Pi Ethernet logger (see below for further details of the Ethernet version). Please be sure to specify the correct logger when ordering.

Meteo-Pi is a flexible, low-cost data-centre device for Davis weather stations. It’s a great new way of linking a Davis console to a powerful but green and inexpensive Raspberry Pi computer.

Meteo-Pi is a two-part cabled adapter linking a standard Davis weather station console (VP2, Envoy or Vue) to a Raspberry Pi computer. The two parts are: a console interface that fits into the console much like a traditional logger and a Raspberry Pi input adapter in the form of a microHAT (µHAT), which means that it plugs directly on to the interface pins of the Pi. The two parts are joined by a Davis-compatible cable with RJ11 connectors. Meteo-Pi appears to software running on the Pi computer as a simple serial device (ie connecting via a COM port) and so virtually any Pi-compatible software should be able to receive data from the console and in the same formats as any other Davis logger. 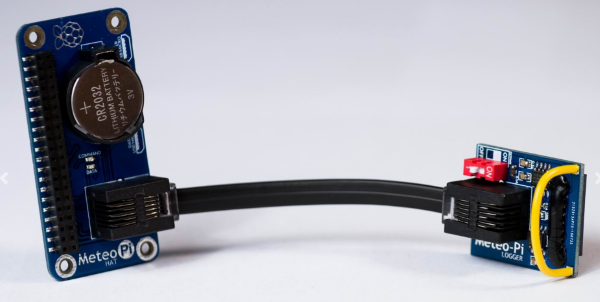 Meteo-Pi’s main advantage is that it allows any weather station programs able to run on the Raspberry Pi to receive serial weather data direct from the console. This provides two key benefits:

The  simplicity of the Meteo-Pi design allows it to be sold at relatively low cost. Of course you still need to buy a Pi and a few associated accessories (power supply, SD card etc) but it should still be possible to build a complete and reasonably powerful data-handling solution, including the Meteo-Pi unit itself, for around $/€/£120 (and remember that  Meteo-Pi does not need a separate logger – other than the Pi, it is fully self-contained).

Remember also that most recent Pi versions are available with WiFi onboard and so it’s perfectly possible to locate a miniature Pi computer close to your Davis console and have it talking to other computers on your network and to the Internet over WiFi.

Cables: Meteo-Pi is supplied with two 20cm (8″) cables. One is a 4-conductor and the other a 6-conductor cable. If the 4-conductor one is used then this connects only the data wires between console and Pi. The 6-conductor one allows back-powering of the console from the Pi. The user chooses which cable to use. Both cables are terminated with standard RJ11-type plugs. If the 4-conductor MP cable is used then standard Davis extension cables can be used to provide a longer cable connection (for which we’d suggest a 12m (40ft) extension as a maximum).

If you’ve heard of Raspberry Pi computers but wondered what all the fuss was about then setting up a Meteo-Pi unit with a spare Vue/VP2 wireless console makes a great project, maybe for the winter evenings? Not only will the project be an end in itself and create a dedicated weather computer able to run 24/7 at minimal cost, but the project provides an opportunity to learn a lot more about Raspberry Pi computers in general and maybe suggest other interesting applications for a Pi too. We have a blog article that describes what’s involved insetting up and running a Meteo-Pi unit, including choosing a Pi model. The first part can be found here.

This Meteo-Pi Ethernet logger is quite distinct from the original Meteo-Pi in that it is a standalone Vue and VP2-compatible logger, but it is not in a Pi HAT format. Instead, it connects to a local network via a standard Ethernet cable and can therefore pass data to any computer across the LAN, but note that it requires a cabled Ethernet connection and is not a WiFi part. Functionally, Meteo-Pi Ethernet resembles the Davis WeatherlinkIP logger, which is of course no longer manufactured. Meteo-Pi Ethernet has two main features:

The Meteo-Pi Ethernet logger is now in stock. More details to follow.