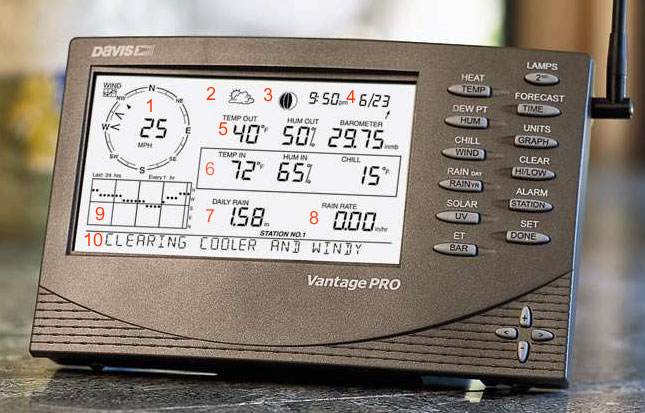 The Vantage Pro 2 console enables the simultaneous display of many different parameter values and of additional graphic and text elements; it represents a considerable enhancement on the very limited display possible with the older Davis stations.

The Current Weather mode is the heart of the display and therefore the one we concentrate on here.

Units can easily be switched between a number of options for several of the parameters (eg mph, kph, knots and m/sec for wind speed) at any time by pressing the Units button.

The actual layout of the screen is fixed but while some display elements always relate to the same parameter, other areas of readout vary according to selections made with the control buttons. The operation of these buttons is straightforward, after a little familiarisation with the wide range of data readings that can be displayed.

The various areas of the screen are explained in the description below, which covers only the main functions of the display. There are a number of additional functions and niceties not covered here but which are fully covered in the comprehensive manuals supplied with the station.

NB The digits in red have been added to this image to mark different areas of the LCD screen as explained below. This image actually shows a VP1 console screen but the layout of the VP2 display is identical.

The standard VP2 station provides for the display of 17 distinct types of weather reading in Current Weather mode, as listed below. This is more than can be accommodated by one button per function (especially if additional sensors are also present) and so typically this is managed by grouping related values on to the same button and allowing consecutive presses of that button to cycle through the available values. For example, repeated presses of the TEMP button will cycle through all the installed temperature readings – which for the basic station is just inside and outside, but if any additional temperature sensors are installed their readings will also be included in the display sequence.

This table is also a convenient place to include accuracy data for the VP2 stations. Important: These are true measurement accuracy figures and should not be confused with display resolution figures, which may be all that are quoted for some other makes of stations but which in reality have little or no relevance to accuracy and are often wildly optimistic relative to true accuracy specifications.

Besides the Current Weather (described above) and Set Up (used only when configuring the console) display modes, the VP2 console can display data in four additional modes:

The Highs and Lows, Alarms and Graphs modes all provide for the comprehensive display and monitoring of specific weather parameters. There’s no space here to describe these in detail – please enquire for further information.