This page contains a few selected pictures that illustrate particular aspects of the weather stations, installations or business events. Clicking on a picture will often show a larger version in a new tab where details can be seen more easily.

This picture shows a VP2 ISS with a 2G/3G Connect data link mounted on the optional Davis tripod base and illustrates several details of one suggested installation option.

The second smaller picture (right – click to enlarge) shows a variation on the VP2+Connect system mounted on a tripod. Here, three separate shorter sleepers are used and the standard tripod pole is retained, giving a lower anemometer height of around 2m.

NB In these two examples, the Connect box is shown mounted below the main VP2 ISS. (If it were mounted directly above then it could interfere with rainfall collection.) As shown, this Connect box is really too close to the ISS – Davis recommend a minimum separation of a few feet between wireless transmitter (the ISS) and receiver (Connect) to avoid overloading the receiver, though we’ve never encountered any such problems in practice. The Connect could be mounted lower down on one of the tripod legs, though this might not be ideal in poor mobile signal areas.

Ideally, the Connect unit could be mounted separately, off to one side and higher up, if feasible, to optimise mobile phone reception. We can supply cabled versions of ISS and Connect if required which would work around this separation issue, but this is not recommended since it completely prevents any supplementary sensor transmitters being added to the configuration. 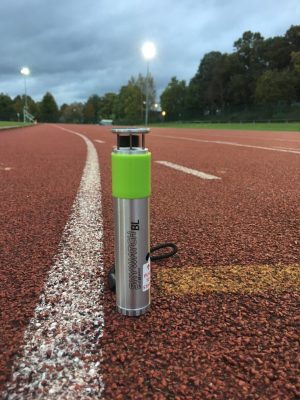 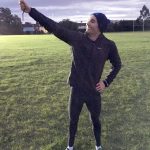 The Skywatch BL400 is a handheld weather station available in 3 models typically measuring wind speed, temperature & humidity, and pressure, and reporting via Bluetooth to a smartphone.

Skywatch BL units are widely used to monitor weather conditions for many outdoor activity pursuits, including track and field events as shown here, but with many other potential applications too.