The 6620 Vantage Connect 3G data link can receive and upload readings from a range of standard Davis Vantage sensor transmitters. When ordering, these sensors must be specified separately from the Connect unit itself. This page explains the various sensor options that are available.

The basic rules are:

A typical Connect installation would include one standard Integrated Sensor Suite (or Plus ISS) to provide readings of:

Listed above are the readings that are actually measured by the installed sensors. There are additional readings that the software calculates from the measured readings, such as wind chill and dew point temperatures; rainfall rate; ET/evapotranspiration (if a solar sensor is fitted) etc. These calculated readings are also known as derived readings. The Connect unit also records and uploads summary data such as daily minimum and maximum temperature, wind speeds, rainfall etc.

The standard rules for VP2 wireless transmitters are followed. i.e. a single Connect installation can receive data from only one ISS unit and therefore only one anemometer, one rain gauge etc. To receive data from, for example, two anemometers would require two independent Connect installations. (Readings from the one permitted anemometer can be transmitted using an 6332 Anemometer Transmitter, i.e. rather than connected to the ISS, if achieving a good anemometer exposure is a priority.)

NB It is not essential to include an ISS in a Connect installation, but it would be a relatively special-purpose configuration that omits the ISS.

The previous section outlines the core of a typical Connect installation. There are then a number of additional sensors and associated transmitters that can be added to wireless Connect systems as options, which cover three categories of sensor:

The 6382 Temperature/Humidity Transmitter (pictured right) is the easiest one to describe. This is a self-contained transmitter with a temperature/humidity sensor fixed inside a radiation shield, exactly as in a standard ISS. No additional sensors can be attached to a 6382 transmitter.

The 6372 Temperature-only Transmitter is also simple to describe in having just a single temperature probe on the end of a 4m cable. The temperature probe is encapsulated in a stainless steel sheath and so can be used to measure the temperature of any medium – soil, water or air (but remember that it has no radiation shield and so is not suitable for standard air temperature readings, except in heavily shaded places). As with the 6382 transmitter, no additional sensors can be attached to a 6372 transmitter.

The 6372 transmitter is an economical solution where the requirement is simply to measure just a single temperature value at a given location. But the 6345 Multi-sensor Transmitter (see below) can be fitted with multiple temperature probes of the same stainless steel type and will be a more cost-effective option when temperature needs to be measured at multiple positions in the same general location (e.g. different soil depths).

Note: Two further points here: First, temperature only reads to a resolution of 1°F (or equivalent in °C, i.e. roughly 0.5°C) with all supplementary temperature sensors. Second, 6372 and 6382 transmitters do not have a solar panel on the door as standard and so require the battery changing about every 6 months. A suitable door with solar panel is available as an optional extra. 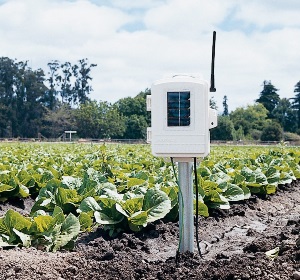 The 6345 Soil Temperature/Moisture and Leaf Wetness Transmitter (or what is sometimes called the ‘Multi-sensor Transmitter’) can accept a maximum of 12 sensors in total, comprising four soil temperature probes; four soil moisture probes; two leaf wetness probes and two ‘leaf temperature’ probes. It doesn’t have to be fitted with all twelve – it will work perfectly well with just a single temperature probe attached. If the requirement is to measure two or three temperature values (e.g. different soil depths) at a given location then a 6345 transmitter fitted with just 2 or 3 temperature sensors can be a cost-effective answer.

These various transmitters can be mixed, but only in certain permitted combinations and the number of individual transmitters can never, even in theory, exceed eight (the number of available wireless channels) as an absolute maximum. In practice, seven transmitters in total will be the maximum because other rules will intervene before this theoretical maximum of eight is reached.

Data passes from Connect to weatherlink.com via a standard Weatherlink data format. So the more restrictive Weatherlink rules for permitted transmitter combinations apply to Connect (i.e. ‘what can be logged‘ rather than ‘what can be displayed on a VP2 console display’).

The actual rules for supplementary sensors are then as follows:

It’s simplest to work on the basis that only one 6345 Soil Temperature/Moisture and Leaf Wetness Transmitter can be fitted to a single Connect installation (but remember that up to twelve sensors in total can be cabled to this one 6345 transmitter).

However, there are two circumstances in which a second 6345 transmitter can be added to the configuration: