Important (Feb 2019): The 6520 Weatherlink for Mac product remains available but we do not encourage its purchase. Davis effectively stopped updating Weatherlink for Mac some time ago (as indeed they have now also recently done with the Weatherlink for Windows program). As a result, the likelihood of compatibility problems with the latest MacOS versions has increased; these issues can usually be fixed but we do not have the specialist Mac knowledge to be able to offer support in individual cases and all the information we have on this topic can be found on our Davis knowledgebase..We therefore recommend that Mac owners use alternative software, especially the Weathercat program mentioned below – we do not sell Weathercat but it is available from the Weathercat website. 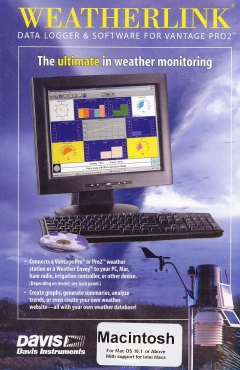 There is a version of the Weatherlink data logger and software pack specifically designed for connection to Macs – this is the 6520 Weatherlink for Mac pack, which supports only Intel Macs running OSX v10.1 or later. (There used to be an earlier version of the 6520 Mac logger with a serial interface that was compatible with older Mac versions but that has long since been discontinued.)

Although this 6520 Mac Weatherlink version is readily available, we would actually recommend that, even if you routinely use a Mac rather than Windows, it is well worth considering using an older 32-bit Windows PC as a dedicated weather PC rather than the Mac Weatherlink version. This is not in the slightest a ‘theological’ view on Windows vs Mac as user environments, but reflects some important  practical and feature-related limitations associated with the Mac version, which include:

Please remember that data delivery from the Mac’s USB port to the Weatherlink program is still usually mediated by means of a third-party USB driver written by the maker of the USB chip used in the logger (which is Silicon Labs in fact and not Davis). With a new Mac operating system version it will often be this USB driver that needs updating via a download from the Silicon Labs website, while the Weatherlink program itself remains fully compatible between OS versions.

It is possible to move back and forth between Windows and Mac versions by purchasing the appropriate software. To be clear, the logger hardware is identical between Windows and Mac – it is simply the appropriate Weatherlink software (and any associated USB drivers) that needs to be purchased and installed. (Ownership of the Windows version does not automatically confer a licence to use the Mac version and vice versa. Downloads of program updates from the Davis website will only install and function correctly if a full program copy of the appropriate OS version has previously been successfully installed and run.)

To reiterate our advice above: In general, Weatherlink for Mac is a perfectly serviceable program which is run successfully by a substantial number of users around the world and offers broadly similar features to the Windows version. But the Mac version does have some significant limitations – if these are relevant to your expected use of the software then you might wish to consider running a Windows PC instead in order to gain access to the full set of features and support that the Windows Weatherlink version offers.